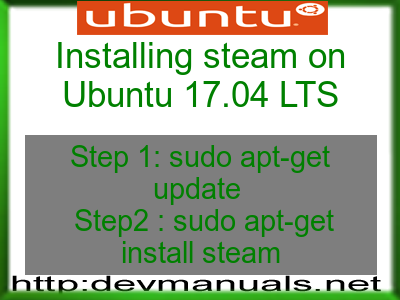 First of all update your system with the command:

Above command will download the package lists for Ubuntu 17.04 on your system. This will update the list of newest versions of packages and its dependencies on your system.

After downloading the latest package list with the help of above you can run the installation process.

If steam is not installed on your compter then the command 'dpkg -L steam' will give followin error.

After system update use the following command to install steam:

Above command will confirm before installing the package on your Ubuntu 17.04 Operating System. If you are not already logged in as su, installer will ask you the root password. After completion of the installation you can use the package on your system.

How to uninstall/remove steam from Ubuntu 17.04?

Now we will see the commands for uninstalling the steam from Ubuntu 17.04. For uninstalling this package you can easily use the apt command and remove the package from Linux Operating System.

To remove the steam following command is used:

Following command is used to remove the steam package along with its dependencies:

This will remove steam and all its dependent packages which is no longer needed in the system.

Following command should be used with care as it deletes all the configuration files and data:

or you can use following command also:

Above command will remove all the configuration files and data associated with steam package. You can can't recover the delete data, so, use this command with care.